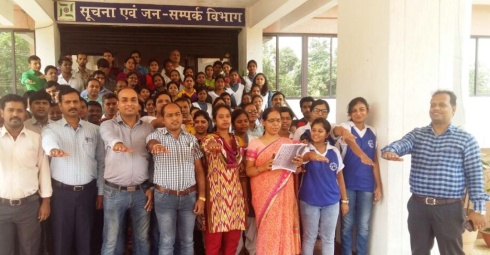 Jharkhand State Information and Public Relations Department personnel will soon rival the cleanliness inside their offices in Jharkhand,claimed the authority.

Today,the IPRD personnel led by its Deputy Director Shalini Verma took a vow to keep their office complex inside the Suchna Bhawan in Ranchi clean.

The move was in connection with ‘Swatchh Bharat Mission’ launched by Prime Minister Narendra Modi last year.By honouring the Mission,they were administred the “Cleanliness Oath.”

This means that all of them will contribute voluntarily towards cleaning of their official premices.The event was presided among many staff and employees of the state IPRD including two Assistant Directors- Rashid Akhtar and Biru Kushwaha-and Sunita Dhan.