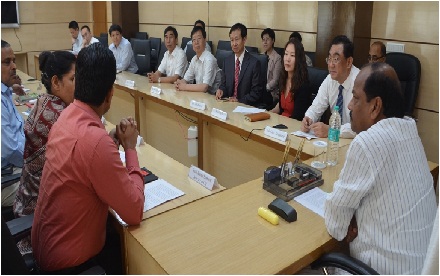 While Shanxi Province is rich in minerals,32 percent of India’s coal reserve lies in Jharkhand.The central government has simplified rules to attract investment.

In addition to development of mining,investment was needed in sectors such as tourism,food processing,automobile and cement.

The state government plans to attach importance to solar energy,said Jharkhand Chief Minister while holding discussion with China’s Shanxi Province’s Vice Governor and his team inside the Project Bhawan in ranchi on May 18,2016.

Also Das who sought cooperation from the Chinese team for building Smart City reqquested them to participate in the Global Summit slated to be held in Jharkhand in November 2016.

*Picture shows Jharkhand CM Raghubar Das and its senior officers hold discussion with China’s Shanxi Province’s Vice Governor and his team inside Project Bhawan in Ranchi on May 18,2016.