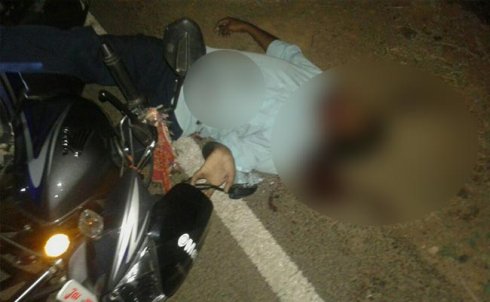 *Picture courtesy ndtv.com hows the spot where the journalist was shot dead in Chatra,Jharkhand.

If the police is to be believed,the cause behind the murder of a journalist with a local Hindi TV news channel in Jharkhand’s Chatra district on May 12 was suspected to be his failure to pay ransom to Naxalites.

Late journalist was also a contractor who had allegedly gained more than a million rupee contract work in Raipur police station area in Chatra.This is learnt to have prompted Naxals belonging to the TPC outfit to demand Rs 7 lakh as ‘levy’ from him.

Chatra Superintendent of Police Anjani Kumar Jha today said, TPC Naxals had been demanding seven lakhs from the journalist for contract work that he was doing in Rajpur police station area, which could have been the cause for the assault.

Three people have been arrested and three mobile phones and an Apache bike have been recovered from them.Incidentally,the alleged mastermind of the murder, Mukesh Ganjhu remains to be absconding and the police are on a manhunt to nab him.