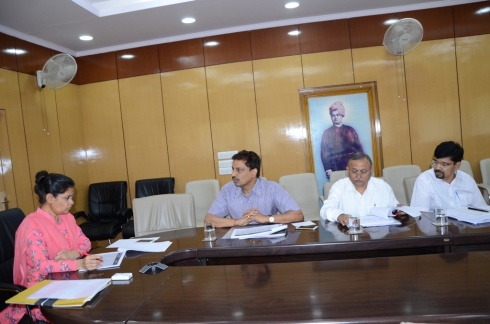 *Polytechnique institutes will be set up at Sub-Divisional level in every district.

*Rules and Regulations connected with appointment of teachers and staff as well as appointment will go on simultaneously.

While reviewing the works of the state Higher and Technical Education Department,Jharkhand Chief Secretary Raj Bala Verma gave these directives to the concerned officers inside project Bhawan in Ranchi.

“This can help these Institutes start functioning immediately after their buildings were constyructed”,said the CS who welcomed Consulate-General of the People’s Republic of China in Kolkata,Ma Zhanwu. .

!*Jharkhand Chief Secretary Raj Bala Verma reviewing works of the state Higher and Technical Education Department inside Project Bhawan in Ranchi on May 16,2016

2.*Jharkhand CS raj Bala Verma welcomed Consulate-General of the People’s Republic of China in Kolkata,Ma Zhanwu inside her office in Ranchi on May 16,2016.