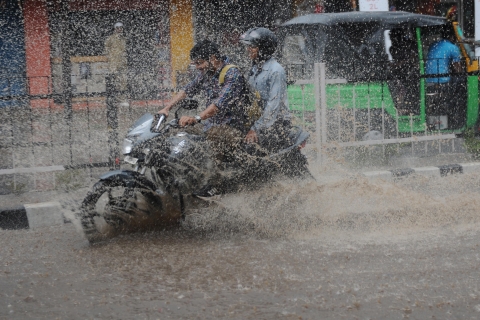 Pictures by Ratan Lal 1.An motorcyclist ride his bike through a flooded street after unseasonal heavy rain at Kanke road in Ranchi on Tuesday.

A rain and hail soaked Ranchi on Tuesday afternoon.It was summer season’s first Nor’wester bringing temprature down to 34-35 % C in Ranchi and several other parts of Jharkhand.

The summer saviour storm originated near Ranchi and hit the capital around 2pm with a wind speed of 36kmph. Even Jamshedpur and its adjoining areas encountered the Nor’wester around the same time.

2.Traffice playing at a flooded street after unseasonal heavy rain at Kanke road in Ranchi on Tuesday.

The wind speed was nearly 30kmph. The weather observatory in the Capital of Jharkhand 5.8mm rainfall. Hazaribagh, Ormanjhi in Ranchi, Seraikela and Ghatshila also experienced hail with rain.

Senior Met official in Ranchi Upendra Srivastava said it was a low-intensity storm, but it managed to drag down maximum temperatures by a couple of degrees.

This unseasonal rain and hailstorm have reportedly caused extensive damage to standing crops of vegetables that are waiting to be harvested, causing alarm for farmers.

According to details gathered by Birsa Agricultural University (BAU), Ranchi, wheat crop waiting to be harvested, vegetables, coriander and mango crop that are in the flowering stage have received the worst blow.