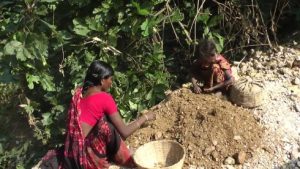 Three women died when an abandoned mica mine caved in and trapped them while they were illegally mining there in Jharkhand’s Koderma district, police said Friday.

According to police, these three women together with a couple of others whose identity was not known had gone to extract mica from the abandoned mine located at Ekwa neaar Dhodhakola of Koderma district, about 160 km from Ranchi,on Thursday. The mine roof caved in, trapping them inside.
The police took out the bodies of these women.Two of these three women were identified as Basanti Devi(45) and Tarba Devi(40).

Illegal mining is rampant in Jharkhand. More than 350 people have died in related accidents in the state in the past ten years.

Seriously enough,through these mica mines were illegal,a boom in mica-a key ingredient in products suchas facepacks,mascara,eyeliner,lipstick,and nail polish-is being fuelled by soaring demand for natural cosmetics,as artificial make up made of synthetic chemicals have been linked to illness,including cancer.

As it is,it has been over two decades since most mica mines were closed on environment grounds,but the closure helped many people-men,women and childrenm-to resort to illegal mining.