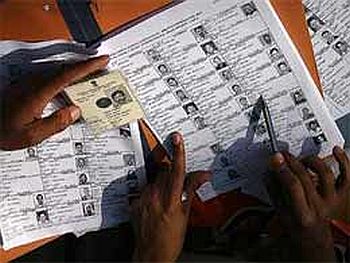 Jharkhand has been famous for scams.This time when the state is under the President’s Rule,the names of more than 86,000 voters were missing in Ranchi alone.These names were allegedly deleted by the concerned officials,alleged Jharkhand Speaker CP Singh.

Demanding an inquiry into the deletion of names of the voters,Singh has appealed to the Chief Election Commission to ensure that the officials found guilty must be punished.

“The process to delete the names of voters was still on.We have heard that the names of more than 50,000 voters were removed from the voters list”,said Singh adding that he had despatched a letter to CEC lodging his complaint.

Singh was elected as MLA from Ranchi for the fourth consecutive term in 2009.His support base is widespread in Ranchi Assembly constituency.Most voters whose names were deleted from the voters list prepared by the Election Commission under the supervision of the Deputy Commissioner were suspected to be loyal to Singh.”Thank God we could unearth the scam.Otherwise,with my voters out of the voters list,I would have lost the polls this time”,said Singh.