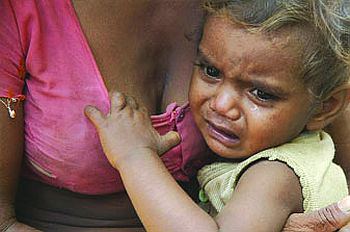 Five-year-old Munni has curly hair with her hand and legs as thin as match sticks.Also,she is pot- bellied,a symptom of malnourishment.

Munni is not alone.Like her are over 45,000 malnourished children in Jharkhand.To contain their problem,former chief minister Arjun Munda had okayed a plan to track them and provide proper nutrition with the help of the staff of a number of agencies including the Anganbari Kendras and the UNESCO.

The plan,first of its kind in India being given final touches under the supervision of the state’s Principal Secretary Mridula Sinha,had got stuck with the President’s Rule imposed in this state on January 18.

However,in a meeting of the Governor’s Advisory Council in Ranchi on Friday,the Jeevan Asha scheme was given a go ahead bringing cheers and hope among the families of the malnourished families.

Even Sinha was sanguine about the plan.”We are trying to institutionalize Jeevan Asha”,said Sinha.

In the same meeting,two other major decisions of the Arjun Munda government were rejected.One,its recommendation for the dissolution of the Assembly.Two,its proposal to create 23 new Blocks in Jharkhand.