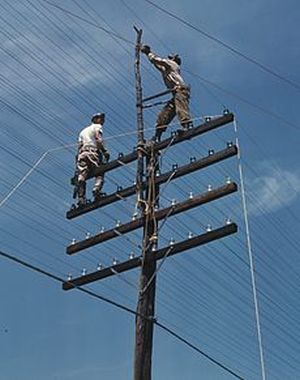 When ever there is a power cut due to a connectivity problem,Raknu Manjhi climbs up the stairs of the tower carrying live wires of 11,000 volts.He fixes up the problem and climbs down.

Manjhi is among 200 odd electricians.They have been working on the daily wage basis for the Jharkhand State Electricity Board,each getting a paltry sum of Rs-500-Rs 1000 per month,for long.

In the past,atleast six electricians had died due to electrocution in this state.Unfortunately,since none of them carried any insurance on their life,the next of the kins of the deceased did not get any compensation.

Now,a group of these private electricians in Dumka were up in arms.Their demands include an Identity card and payment of their wages through the bank.

While they were planning to launch dharna,Manjhi told JharkhandStateNews.com that they want the JSEB to get their life insured as well.”We are poor people.We can only urge the higher authorities to consider our demands sympathetically”,he said.

In any case,the day these private electricians proceed on dharna,the power supply in Dumka is bound to take a beating.Any body from JSEB listening?