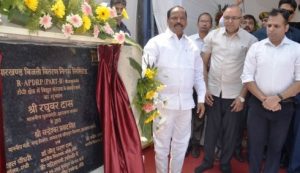 The aim was to strengthen power distribution network in the state capital and Jamshedpur to begin with.

As per the project being implemented the Cenre’s R-APDRP(PART-B),11 new power stations,increase capacity of 14 Sub Stations,installation of 6233 KM long new wire and keep the electric feeder away from 364 KM long wire.

With adoption of the mobile App scheme,any consumer can download the App on his/her mobile and pay electricity bill,secure new connection,check the status of bill and lodge complaint connected with power distribution and so on.”This is going to help consumers on a regular basis”,said the CM.

Though the project was approved in 2013 to be implemented within three years,it was inaugurated three years late on April 28,2016.

In phases,the project is meant to improve the quality of power supply and strengthen distribution network in Ranchi,Gumla,Lohardaga,Simdegaa,Dhanbad,Chirkunda,Bokaro,Gomia,Fusro,jamshedpur,Chakardharpur,Chaibasa,Ghatshila,Musabani,Dumka,Deoghar,madhpur,Godda,Mihijam,Sahebgunj,Pakur,Hazaribagh,Chatra,Sonda,Patratu,Giridih,Koderma,Daltongunj and Garhwa.

2.Jharkhand CM Raghubar Das marking open foundation stone of the project with (on his Left)Principal SecretarySKG Rahate and Rahul Kumar Purwar in Ranchi on April 28,2016.