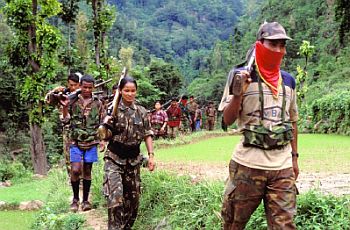 The CPI(Maoist) is on the run in Saranda forest in West Singhbhum district.

Reports say they are unable to regain control over the area of their influence.The camp set up by the CRPF there at Saranda was proving to be a big set back to the rebels,said a report quoting a Maoist.

Reports also say that on a long range patrolling since May 24 when the Maoists had attacked the Congress convoy in neighbouring Chhatisgarh, the CRPF men quickly took positions after the Maoists opened fire on them near Baliba in West Singhbhum district. A brief gun fight took place between them. But ultimately the Maoists fled and the security has been tightened in the area.

On Saturday, quick action by the CRPF personnel forced them to retreat into deep forest of Saranda, said a senior police officer.