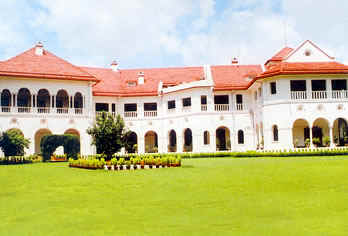 The Raj Bhawan today trapped three alleged Natwarlals and after lodging an FIR,handed them over to the police.On behalf of these Natwarlals,a con had posed himself as Kanishka Singh,an associate of the Congress party’s vice president,and using the telephone asked the Raj Bhawan staff to fix an appointment for them with the Governor Syed Ahmad.

Investigations by the Raj Bhawan confirmed that the original Singh had never rang up and sought any body’s appointment with Ahmad.Instead in his name some body else had used Singh’s name to do so.Next,the Raj Bhawan invited these Natwarlals.

And when they arrived at the Raj Bhawan,they were nabbed and handed over to the police,said a press communique issued by the Raj Bhawan’s Kranti Kant this evening.

.”The identity of these Natwarlals and the Con was being investigated by the police”,said the police