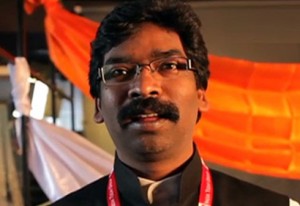 Setting a divide in the camp of the Opposition in Jharkhand,the Jharkhand Mukti Morcha today declared that its candidates will contest both Assembly bye polls slated by be held in Godda and Panki on May 16.

The announcement comes two days after the Congress and the RJD leaders had met the JMM chief Shibu Soren and vice president Hemant Soren and sought its cooperation in putting up a united fight against the ruling BJP.

“There is no possibility of any alliance.We have decided to to field candidates for both Panki and Godda Assembly seats,” said Hemant Soren,ex chief minister, told reporters here.

The ruling Bharatiya Janata Party (BJP) will field its nominees for both these Assembly seats.

Even the Congress has also decided to contest the Panki seat which fell vacant after its legislator Videsh Singh died of a heart attack.

The RJD too has announced its intention of contesting from Godda, which was represented by the BJP’s Raghunandan Mandal who also died of a heart attack.

“We are trying to field united candidates and the efforts are on in this regard. We are still hopeful that an alliance will be formed against the BJP,” said Congress state president Sukhdeo Bhagat.

Alongside,the Rashtriya Janata Dal led by Lalu Prasad is trying to get the support of the Congress and the JMM for the Godda seat.