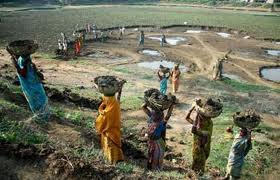 That many workers had committed suicide complaining non payment of wages under Mahatama Gandhi National Rural Employment Guarantee Act in Jharkhand is an old story.The latest is hunger strike launched by a MNREGA worker and his family to press for the release of his wages for construction of a well.

Mohammed Shakir,his wife Kasida and their daughter Razia Khatun,residents of Katkamsandi block in Hazaribagh,have been sitting on hunger strike since Monday to demand their bonafide wages for construction of a well.

None of them had taken any food or water since they launched the strike.”Their condition is stable”,said Dr Sudhir Singh,who had examined them this morning.

Shakir said he had sold his goat to bribe the MNREGA staff including Rajgar Sevak Manoj Kumar.”Only then,I was paid Rs 17,400.The rest amount of more than Rs 20,000 still remain unpaid”,he cribbed.

Shakir has also demanded that Kumar be placed under suspension.But Kumar defended himself saying he was being falsely implicated in this case.”Let there be an inquiry,facts will come out”,said Kumar.