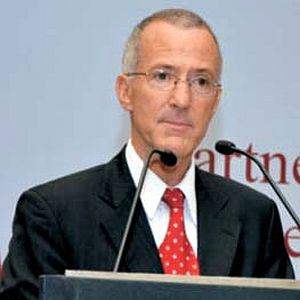 The Indian Call to Action for Child Survival and Development summit follows last year’s Child Survival Call to Action, which was co-convened by the Governments of Ethiopia, India, and the United States with UNICEF,announced William Hammink, Mission Director, U.S. Agency for International Development in India addressing the press conferance in New Delhi today.Hammink said in 2012 more than 700 global leaders came together in Washington, and issued a global challenge to reduce child mortality to 20 deaths per 1,000 births—or lower—in every country around the world by 2035. “Since then, under the banner of Committing to Child Survival: A Promise Renewed, more than 165 governments and hundreds of civil society organizations, private sector companies and faith based leaders have pledged to redouble efforts to combat child survival and improve maternal health and to focus greater effort on helping the most disadvantaged and hardest to reach children in every country”,he said.

At the forefront of the fight against child mortality and morbidity, India is leading the global community in placing a renewed emphasis on this important mission. The upcoming summit demonstrates India’s leadership and commitment to both the global community and the children of India. India has an opportunity to make great gains on child survival with increased commitment and funding for the most effective life-saving practices. Moreover, India’s unique culture of social entrepreneurship, innovation, and technological advances present a historic opportunity to accelerate progress in reducing childhood illness and death,Hammink said.

Hammink said India is a regional leader and can guide and support other countries in several ways. We commend the progress India is making in tackling child survival and strengthening India’s health sector. India is one of the countries to have significantly reduced the incidence of HIV – from 0.41 percent in 2002 to 0.27 percent in 2011. India has reduced its maternal mortality by more than 50 percent – from 570 in 1990 to 212 in 2009 per hundred thousand live births – and child mortality by 45 percent from 119 in 1992 to 59 per thousand live births in 2012.

He further pointed out that India’s notable achievement in polio eradication is a case in point, too. Last month, India celebrated two years without a single case, which is a major public health milestone. We applaud the Government of India’s continuum of care approach to child survival – from addressing adolescent health, mothers’ health, new born health, and child care and development. This is an exemplary vision.

“The United States has been a longstanding partner of the Government of India, and our relationship dates back more than six decades. The U.S. Government through its agencies including the United States Agency for International Development, and the Centers for Disease Control and Prevention has been actively engaged in working alongside the Government of India as it endeavors towards ending preventable child deaths within a generation. In recent years, USAID has made significant investments in the area of reproductive, maternal, newborn, and child health, nationally and in key Empowered Action Group States”,he said.

“In closing, I would like to say that the United States, already the largest funder of global health, will continue to carry that mantle forward and we will accelerate our partnerships with countries around the world.

Our expectation is that this conference will galvanize multi-stakeholder action to step up the child survival efforts in India and sharpen focus on activities and geographies that will have an impact and bend the curve on child mortality. I hope that we will all look back on this upcoming summit as a special moment in time where we recommitted ourselves to achieve a shared vision of ending all preventable child deaths”,Hammink said.

“The U.S. Government is proud to be a part of this initiative and give our unwavering support to the India’s Call to Action. USAID is committing that it will target its resources to support the Call to Action for Child Survival. In the coming months, USAID will look at opportunities for newer partnerships with multi-stakeholder engagement including the government, private sector, entrepreneurs, and civil society to identify, and scale up solutions to address the challenges in accelerating child survival efforts”,he added.