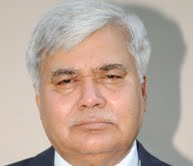 The Biometric Attendance System installed at the state secretariat,Project Bhawan stands testimony to the changing fortunes of the site in Jharkhand.

The work culture of the state government personnel was always a cause of concern for the successive governments.In the past,several attempts to ensure they attended office in time were unsuccessful mainly because the reform initiated was in the form of lectures and sermons and many heads of the departments themselves attended duty late.

After taking charge as Chief Secretary on March 31,Ram Sevak Sharma has been coming to the office dot at 10 A.M,often leaves late in the evening and even takes lunch in office.

In fact,even before coming to the office,he starts giving the task of the day at 6 AM to his subordinates through SMSs. “The SMSs begin to come early leaving you with no alternative than to comply with his directive”,says a senior IAS officer showing the SMS he had received in the morning.

“Now with the biometric system of attendance installed,the records are fed in the data base.As such no body can bunk the office or come late”,says another senior IAS officer who is Principal Secretary of a department.

In addition,Sharma has sent few strong messages signaling a change at the Project Bhawan.He resolved to work strictly within the Rules of the Executive Business,yet striving for greater use of Information Technology to ensure efficiency,accountability and transparency in the system of governance.

Jharkhand,despite being rich in minerals,water,forest,salubrious climate and its lovely people,faced significant challenges in overcoming the weaknesses of implementation capacity. This was evident from the fact that it was unable to even spend the budgetary allocations.Several Government of India’s evaluations of welfare and anti poverty programmes indicate that Jharkhand when compared to top performers,Tamil Nadu and Rajasthan is low performing state with regard to implementation effectiveness,often falling below national average.

A World Bank Report ‘Jharkhand;Addressing the Challenges of Inclusive Development’ requisitioned by the Arjun Munda government in 2007 had said that the challenges in the area of governance stemmed from the lack of political stability and an inefficient administrative system.

The first challenge was to evolve a political consensus involving disparate parties and factions more accountability and transparency at all on key reform issues.The second is to improve the efficacy of the civil service by rationalizing departments and schemes,curbing premature transfers,improving performance and career management and strengthening the presence and quality of block administration.The third is to encourage more accountability and transparency at all levels through greater use of e-governance,full implementation of the right to information legislation and decentralization. The fourth being establishing genuine rule of law,which means curbing organized mafias and enforcing the law universally.

“The government should work closely with Jharkhand’s many civil society groups to achieve these ends not only through consultation,but also by using their skills”,suggested the World Bank Report.

Aware of these suggestions in this state where the President’s rule is on,Sharma during the past nearly three months of his tenure,has undertaken a number of initiatives to oil the bureaucratic machine to make it deliver and become people friendly.

4.Management Information System to monitor the department wise status of the fund viz a viz schemes being implemented by it.

5.Linking Aadhaar of the benificiaries with social welfare schemes such as scholarships,pension,old age pension,PDS and so on.

Sharma knows that e-governance combined with business process re-engineering to simplify transactions and make them more transparent can play a vital role in reducing opportunities for corruption.”We are trying to streamline the administrative apparatus”,says Sharma.

Records show that computerization of land records in Karnataka,E-Seva centres in Andhra Pradesh and introduction of computerized file monitoring in the Karnataka Secretariat are examples of successful e-governance initiatives.

Sharma,who was successful in institutionalizing the Unique Identification Authority of India and implementing its Aadhaar project across the country,is aware of these success stories.Since he has the expertise and administrative ability to structure the application of e-governance,along with business process changes,such as banning the use of stamp paper,placing guidleline values on the internet and creating model deeds,he can bring shine to the government’s face in public.