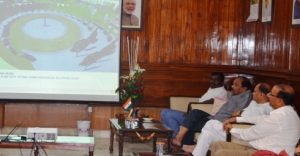 Jharkhand Chief Minister Raghubar Das today reviewed the works of the Urban Development Department and directed the concerned officers to ensure that the works related to development projects were complete in a time frame.

“Keep officers engaged in meetings and envolve them right from the date of issuing tender of the project to fixing its deadline”,said the CM while reviewing the works of the Urban Development Department in Ranchi today.

In the meeting,the CM directed them to get the works connected with the Bada Talab,beautification of 13 ponds,fly over,urban haat and vendor market at Jaipal Singh Stadium in Ranchi completed in time.

During the meeting,the CM saw the power-point presentation on upgradation of the Harmu river,Birsa Munda Smriti Samarak,Convention Centre,Urban Tower and Haz House in Ranchi.