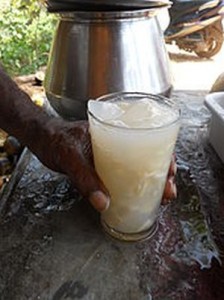 When the summer set in and the Nitish Kumar government banned sale and consumption of country liquor,the demand of palm liquor zoom up in Bihar.

So much so that there is a heavy rush to climb up the palm trees in many areas of Bihar to collect the alcoholic beverage and sale it among the customers there,indicated pictures made available to www.jharkhandstatenews.com today.

As it is,palm wine is an alcoholic beeverage created from the sap of various species of palm tree such as palmyra,date palm and coconut palm,says wikipedia.

A businessman residing in Ranchi,capital of Jharkhand,said that he was planning to invest in palm wine production in Bihar.

“The time is ripe.Because of the prohibition imposed by the Nitish government,the demand is being met by many guys from Jharkhand who supplied liquor illegally to their clients in Bihar and palm liqour is not banned any way”,he opined.

In fact,palm wine production by small holders and individua farmers may promote conservation as palm tree become asource of regular household income that may economically be worth more than the value of palm sold in the market in Bihar.

In any case,since atleast 10 districts of Jharkhand share borders with Bihar,the Excise Department and liqour vend owners of the state are “expecting a windfall from prohibition in the neighbouring Bihar”,reports Times of India.

The ToI’s report said:”The Jharkhand excise department was laughing all the way to the bank even before the ban was imposed. In March, the department earned Rs 18 crore more in revenue, an increase of 45 per cent, from the increased number of applicants for liquor shop licences. Deputy commissioner of excise department Gajendra Kumar Singh said many applicants were from the areas bordering Bihar.”