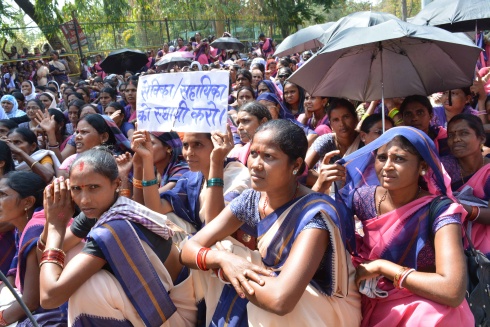 Hundreds of Anganwadi workers from Jharkhand state today protested against poor working conditions and substandard food being served to children and pregnant women.

The protesters under the banner of Jharkhand State Anganwadi Workers Union wore bangles and sat in Dharna near the Raj Bhawan in Ranchi on Monday.

In the past,to press for their demand,they had sat in Dharna in New Delhi at Jantar Mantar and in front of the Jharkhand Assembly for nearly a month.

Explaining the grievances of Anganwadi workers who were paid on daily base basis,Sundari Tirkey said that their job must be regularized and their status must be made equal to the teacher of the state government run schools and the retirement age must be raised from 60 years to 65 years.