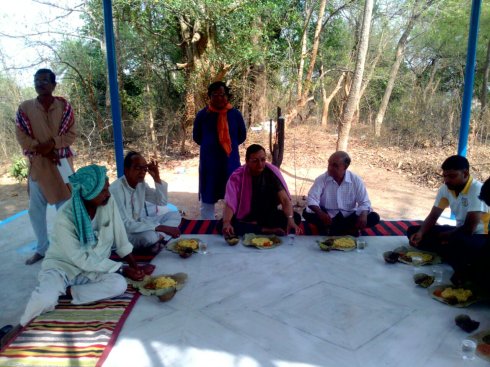 Priests offered prayer at Bhairav sthal and ‘Bhoj’ was organized. From 7th April Pahan will perform the rituals of worshipping “Maa Jhumkeshwari”. The formal opening of the fair will be held on April 5 2016.

The main event of Chhau dance,its performances by artists of different states and dance competition will be held on April10, 11 and 12,said Seraekela SDO,Deepak Kumar.

The event will be held at Birsa Munda Stadium, Saraekela. District Administration included adventure sports in the festive atmosphere of ‘Chhau Mahotsav’ to attract the youth and common mass. Water sports in Chandil Dam, Tent tourism and rock climbing will be held from 7 to 9th April 2016.

Enthusiast youth are registering themselves for adventurous sports. SDO Shri Kumar said that Adventure Sports will be free of cost. On the other hand all the preparations related to the Mahotsav have been completed.
This year, especially Mayurbhanj Chhau and Singuwa Chhau will be staged for the audience. Different artisans of different states of the country will entertain the audience by performing their traditional folk dance. Maharashtra’s Lavani dance, Odissi, Kathak ballet group, Lehri Ballet group, Gotipua, Garba from Gujrat, Ghumar from Rajasthan, Mayurbhanj and Singuwa Chhu will be the the another attraction of the event.

Many stalls from the State Government will be there in the campus for the common mass, where the departments will provide information related to the Government Policies. Stalls including Drinking water and Sanitation, Agriculture Department, Fisheries Department, DRDA, ADHAAR, NIT Innovation Skills, Khadi gramodyog, AYDA, JHARCRAFT, Red Cross, Paper Messi, Chhau Mask and costume stall, Tasar silk, Meena Bazaar, Book Fair stalls and the handicraft stall by extinct primitive tribes ‘Sabars’ will be there.