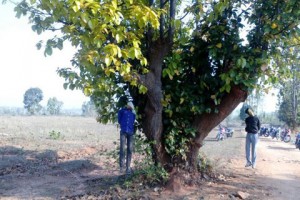 A group of eight persons lynched two men by beating them and hanging them to death in Balumath forests in Latehar district, 100km from Ranchi,Jharkhand’s capital, on Friday morning.

Notably,while the two deceased-Muhammad Majloom, 35, and Azad Khan alias Ibrahim, 15-were Muslims,the eight accused,whose identity was not made public by the police till 4 A.M on Saturday,were Hindus.All of them were residents of Jhawar village under Balumath police station in Latehar.

Enquiry revealed that Majloom together with Azad Khan were moving with eight buffaloes on their way to the weekly market.They were beaten up and hanged to death by the accused in Balumath forest area on Friday morning.