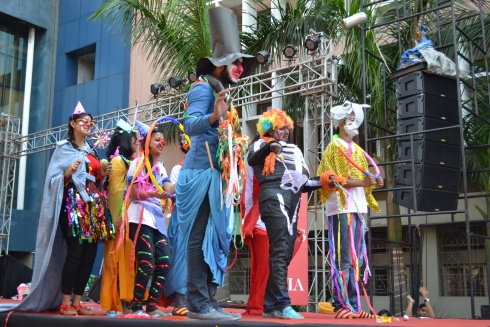 Ranchi based Xavier Institute of Social Sciences(XISS) is limping back to normalcy after a day of function on its premise.

On Thursday,the day had begun with Marathon.The central theme was ‘Cleanathon’,with the idea of “run for cleanliness”.

The event was organized by Jasdeep Singh Vasu and Vishakha Chowdhary. The winners were Pramod kr. Munda from BIT Lalpur, and Soham Ghosh, Amarjeet kumar from XISS, and from the girls’ side the winners were Dipshikha Kumari, Sonal Sinha from St. Xavier’s College and Sushmita Kujur from XISS. The Winners were awarded Rs. 3000 cash.

The event that followed Marathon was Face Painting; the theme was nature’s elements – air, water, fire and earth. The winners were Abhilasha and Anurag from XISS and Sonal and Nidhi from St. Xavier’s College.

The next event that took place was FIN Quiz, it was conducted to test the financial capabilities of the students. The winners were Shashi Shekar, Harsh kr. Sharma, Amit Kumar; Pranjal Mishra, Sneha Sah, Zulfiqar Ali; and Mukesh Agarwal, Ayan Banerjee.

A live challenge – Scavengers, was the next event, where the task was to buy, beg, borrow, steal things around the city. The winners of the event were Jithin, Stacey and Jijo.

There was a Super over Challenge in which Cricket was played. Vikas Tiwari won amongst the boys and Gitika Srivastava amongst the girls. Both of them being from XISS.
Antakshari was also played, where Anumita Das and group came first.

Acoustica was won by the team from XISS. Members of the band were Sylvia Francis, Christine Dessa, Nishita Lobo and Rudrendu Naskar.

Dance Competition – dancing competition where the students came up with their talent to woo the audience.

With a glamorous touch there was a Fashion Show and the day ended on a musical note, performances by MaXiss band from XISS.