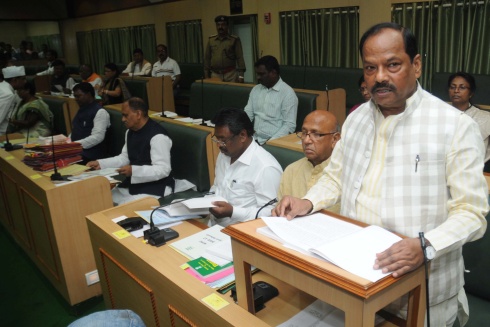 As it is,the budget proposed no new taxes. The budget has allocated 23,356.11 Crore on non-plan component while 32,136.84 Crore has been set aside for plan component of the budget.

Other features of the annual budget are:aims to provide jobs to one lakh people;VAT on pig iron, steel scrap, iron ore, palette and Ferro Alloy plans to be reduced from 5 percent to 2.5 percent to promote micro, small and medium industries;community centres and Dharamshala to be exempted from service tax;reduce tax from 14 percent to 5 percent on plywood, blackboard, flush-door, and laminates;reduce registration costs for immovable property of women;and 10 percent reduction in tax fee and stamp.

For the first time the CM has given concrete assurance that single window system would be put into effect for attracting investment and promoting development of industries in the State.

The CM that an MoU was signed between Jharkhand Skill Development Mission Society and National Skill Development Authority to give further impetus to skill development programme in Jharkhand. To sort out the problem of scarcity of land the government has proposed setting up of Land Bank for speedy allocation of land to the investors.

More,the budget proposes to launch an ambitious 1830 Crore project for Ranchi-Bokaro Expressway under PPP Mode. At the same time a six-lane golden triangle expressway connecting Jamshedpur, Dhanbad and Ranchi would be constructed to cater to high-speed traffic,said the CM.