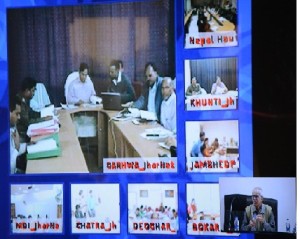 In a review meeting of the ‘Jan Samvad’ programme of the state government, Joint Secretary,Jharkhand Chief Minister Office,Pramod Tiwari today directed the concerned officers to dispose off all complaints and grievances in a time frame.

To do so,they should establish coordination with the concerned officers of the Departments,suggested Tiwari who talked to these Nodal officers of different districts through video conference at Suchna Bhawan in Ranchi.

During the meeting,directives were issued in connection with 20 complaints.The review meeting dealt with complaints lodged by the people belonging to Bokaro,Chatra,Deoghar,East Singhbhum,garhwa,Giridih,Hazaribagh,Koderma,latehar,Pakur and Palamau districts.