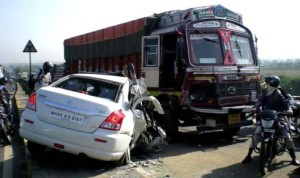 Twelve people were killed and at least 15 injured yesterday when a moving heavy vehicle ploughed into a Saraswati idol immersion procession on the GT Road between Giridih and Bagodar.

The mishap occurred when the driver lost control of the trailer-truck which hit people in the procession, said the police.

Some died on the spot and the injured were rushed to hospitals, added the police.

According to district Civil Surgeon S Sanyal, eight persons died on the spot, two at Bagodar Hospital and one each at Dhanbad and Hazaribagh hospitals.