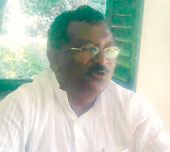 Former Agriculture Minister Nalin Soren faces a non bailable warrant of arrest.A local court had issued NBW anainst him and 9 others in connection with the multi-crore rupees seed scam during the Madhu Koda government in 2007.The vigilance bureau, which has been probing the matter, informed this to the Jharkhand High Court on Saturday.