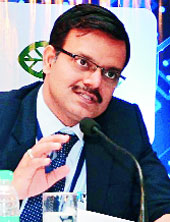 Jharkhand Chief Minister’s Secretary Sunil Kumar Barnwal has observed that the state government will not tolerate any delay in payment of compensation and pension.

“To make available payment to beneficiaries in these sectors in every district is the priority of the state government”,said Barnwal adding that legal action will be taken against those officers who will be held responsible for causing delay in releasing payment to the beneficiary.

Under the banner of ‘Jan Sambad’,Barnwal was responding to the complaints of the people through video conference with the concerned district officers inside Suchna Bhawan in Ranchi today.

In a case of Bokaro district,though Bacchan Sao had died in a road accident on July 7,2014,his family had not received the compensation under the insurance scheme of the vehicle.The delay had taken place mainly because the police had not filed its report to the Insurance company,alleged a complainant Umesh Kumar.

In response,Barnwal directed the concerned Nodal Officer of Bokaro to take note of the case and ensure that it was investigated by the Dy.SP and if the Officer in Charge has not performed its duty in submitting its report,take action him.He also directed him to forward this case to the Director General of Police.