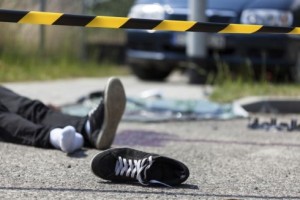 Five persons were killed and three injured in a road accident today at Tablapur in Seraikela-Kharswan district of Jharkhand, police said.

The accident took place when the driver of the car failed to control the vehicle and rammed into a truck.

The victims, all residents of Kharswan, were going to Rajrappa in Ramgarh district to perform the last rite of a family member, said the police.

While four of the occupants of the car were killed on the spot, one of them died on way to hospital, added the police.