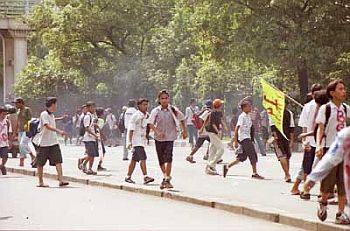 Delhi slipped into tension after after a group of 20 Kashmiri students from the JNU and Delhi University clashed with VHP activists celebrating the execution of Afzal Guru, the key accused in the Parliament attack of 2001.A day after Afzal Guru,the key conspirator in the 2003 attack on the Indian Parliament , was hanged inside Tihar Jail on Saturday,supporters of the Vishwa Hindu Parishad and the Bajrang Dal clashed with JNU and DU students at Jantar Mantar in New Delhi today.

“Trouble erupted soon after 25 members of the VHP and Bajrang Dal gathered at Jantar Mantar in central Delhi to celebrate the hanging by distributing sweets and bursting firecrackers.Within minutes, 20 Kashmiri students from the Jawaharlal Nehru University (JNU) and Delhi University (DU) arrived at the venue, holding placards that read “I am Afzal, hang me too” and chanted “Azad Kashmir” (Independent Kashmir) slogans,said reports coming from Delhi.

“The Kashmiri students felt that Guru was not given a fair trial and accused the government of step-motherly treatment towards Kashmiris.
The group was accompanied by members of the CPI(M-L), Peoples Union for Democratic Rights (PUDR) and National Confederation of Human Rights Organisations (NCHRO) who were condemning the decision”,added the reports.