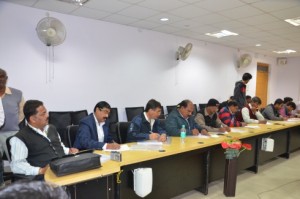 Jharkhand’s Khadi Board Chairman Jainandu today claimed that the “wave created by the Khadi Mela organised by his organisation has reached America as Indo-American Chamber of Commerce has set up a stall” inside the Khadi Mela at Morahabadi Maidan in Ranchi.

Though Indo-American Chamber of Commerce is based in New Delhi,Jainandu,who addressed media persons in Ranchi on Monday,said that top corporate houses such as Tata and Birla had also backed the Khadi Board.

The Khadi Mela,begining on February 5,has been attracting hundreds of people.As per the statement provided by Jainandu,Rs two crore worth Khadi goods were sold inside the Khadi Mela premise on Sunday.