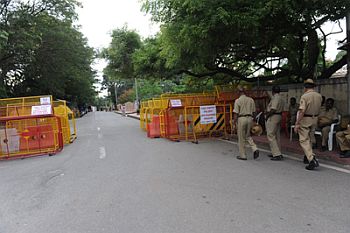 Following the Supreme Court’s directive,Jharkhand police establishment has curtailed the security provided to the VVIPS including ex Ministers and others who were accused in the court of law.

The apex court,in response to a PIL,had observed that it was appropriate if the Prime Minister was provided with a full proof security.But why should the security be provided to the judges, ex ministers and others who were accused in the court of law at a time when there was a need to provide security to woman and common man.

After the top court asked the state government to explain how many police personnel were deployed to provide security to the VIPs within two days,the state police establishment reviewed the issue and curtailed the number of securitymen gurading the VIPs in Jharkhand.

Now,the ex ministers in this state were left with two body guards,each.Two former Deputy CMs Hemant Soren and Sudesh Mahto,who were given Z plus security cover,have to fend with Y security now.The Congress leader and ex Leader of the Opposition R.P.Singh,whose security was also down graded,had expressed his reservation over it.

“I was given two body guards and 1-4 securitymen with house guard.I have returned them and written to the Union Home Minister,Governor and his two Advisors.Now I will provide security to myself”,says Singh.