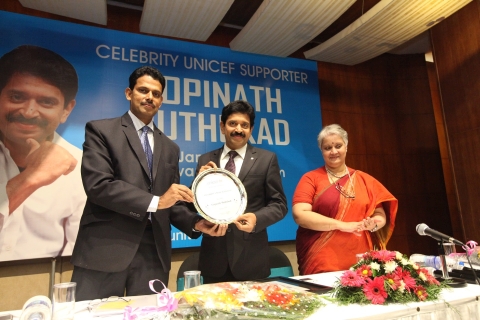 This historic incident is set to take place far away from the national capital New Delhi.The place is located inside Kerala.

At a special function held here today,Job Zachariah, Chief of UNICEF for Kerala and Tamil Nadu conferred on Muthukad the status as “Celebrity UNICEF Supporter”. Muthukad is the first to be granted the prestigious status by UNICEF in Kerala.

Zachariah, appreciated and welcomed Gopinath Muthukad to join the efforts in improving status of children in the Kerala. “As a celebrity UNICEF supporter, he will create awareness on the importance of first 1000 days of a child and on 10-15 essential interventions to be done in the first 1000 days. He would bring enormous credibility and energy in communicating critical messages on child rights to a large number of people, particularly mothers, caregivers and young people.

“I feel honored to formalize my association with UNICEF as a celebrity supporter. I would dedicate myself in fulfillment and realization of children and adolescent rights,” said Muthukad while accepting the invitation from UNICEF. “I will work towards building awareness on promotion of child rights and other important issues affecting children in our society.”, he said

Muthukad founded the first magic academy of Asia and Magic planet, the first magic based theme park, at Thiruvananthapuram. He won the Kerala Sangeetha Nataka Academy award in 1995. He is also a winner of the International Merlin Award, considered the Oscar in Magic, by the world’s largest US based magicians’ organization, International Magicians’ Society.

Welcoming Muthukad as the advocate for the child rights,Sobha Koshy, Chairperson, Kerala State Commission for Protection of Child Rights, said “magic and childhood are intertwined. Therefore magic can play a important role in promoting child rights.” She also expressed her concern over increasing violence and abuse against children in homes. As part of the monitoring under right to education act, the commission will monitor facilities of drinking water, hygiene and schoot toilets in schools.” She

UNICEF celebrity supporters demonstrate commitment to improving the lives of children. Highly talented in their individual right, they all share an ability to bring children’s issues to attention, to galvanize support from the public and lead decision makers and to raise urgently needed funds for vital UNICEF programmes.