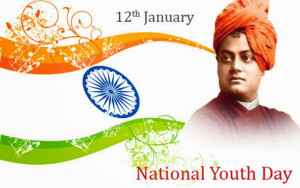 The nation today paid tributes to Swami Vivekananda on his 153 birth anniversary that is being observed as National Youth Day.