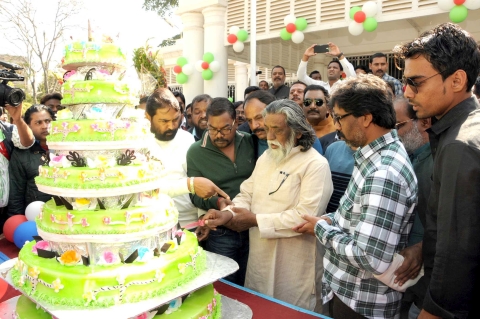 At a time when his son Hemant Soren is the Leader of the Opposition in the Jharkhand Assembly,forrmer Union Coal Ministe,Ex Chief Minister and founder of the Jharkhand Mukti Mukti Morcha (JMM),Shibu Soren today cut the cake on his 72nd birth day in Ranchi today.

A number of his partymen including Hemant were present at his official residence in Ranchi where his birth day celebrations took place in presence of distinguished individuals and media persons on Monday.

Shibu Sore,born on January 11,1944,who was Chief Minister of Jharkhand from 2008 to 2009 and again from 2009 to 2010,was the first serving Union Minister to lead the tribals in Jharkhand,West Bengal,Orissa and MP.

Soren is also the first Union Minister to be convicted for murder.As per the official record,he did so to cover up a case of corruption and soddomy.In any case,he was sworn in as the third CM of Jharkhand on 30 December 22010 after failing to obtain coalition support from the BJP.