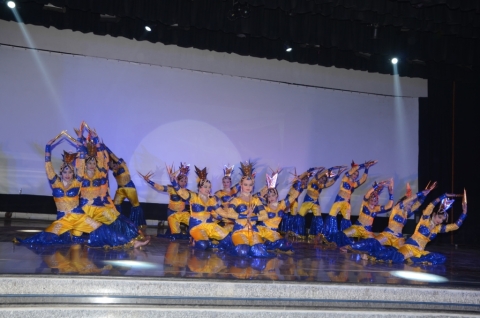 Talent, artistry and exuberance lit the stage of Delhi Public School, Ranchi as students put forth a colourful show of extravagant cultural programme for their school annual function.

The occasion was graced by Manoj Kumar, Deputy Commissioner Ranchi as the Chief Guest and the Guest of Honour, Prabhat Kumar, S.S.P Ranchi and M.K. Burman Pro-vice Chairman DPS Ranchi.

The event began with a soulful rendition of Swagatam by the school band. This was followed by a fusion of Indian and Thai dance to the patriotic tune of Vande Mataram.

Dr. Ram Singh, Principal D.P.S. Ranchi presented a brief report of some of the notable achievements of the students in academics and co-curricular events in the session 2015-16.

He also stated that his prime intention is to impart complete education to the students of Delhi Public School Ranchi so that they are confident enough to distinguish between good and evil. It was also stated by him that the idea of having annual day classwise initiated by him so that everybody or maximum number of children get a chance to showcase their talent.

This year the children of classes IV to VI were also awarded with scholar badges and blue blazers to inculcate a competitive spirit among the children right from the junior classes.

72 children were awarded scholar badges and 32 were given blue blazers for their outstanding performance in academics. Maroon blazers were given to 6 children – Albab Arham Adbi, Nimisha, Tanmay Jain, Sarvesh, Rishav Raj and Riti Raj who have excelled in the field of finearts, sports and other co-curricular activities at the National, State and District level. Trophies were given away to the teams of DPS Ranchi who stood third in Inter DPS Environmental Dance Festival, stood second in National Heritage Festival at DPS Noida.

Moving on towards the cultural segment the mythological roots were brushed as the students took us back in time with a heartfelt dance drama titled ‘Valmiki Pratibha’ on the life of the creator of Ramayana formerly known as Daaku Ratnakar.

The students of standard 11 and 12 swayed the audience as they ventured on a trip to Venice with a marvellous performance of Shakespeare’s Merchant Of Venice.

The school band concluded the programme with a melodious medley of songs which struck the right cords of everyone’s heart.

Yuvraj Pradhan as Shylock won a lot of accolades for his brilliant performance and so did Vidisha Mishra as Portia. In the drance drama it was Zaid as Valmiki, Vishal as Narad Muni and Reyan who played the role of ‘Vivek’ who stole the show.

Manoj Kumar, the Chief Guest addressed the hall full of eager students, parents and other deemed guests present. He encouraged the aspiring students to work hard towards achieving the greater good. These words were met with a loud round of applause from the zealous audience.

The grand finale brought together all the participants of the night and the evening came to a successful end with spirited laughter, genuine smiles and curious minds.

This Edifice of learning has constantly been soaring high and the innumerable achievements of the students and staff make the school a force to reckon with and the annual day was a testimony to this.