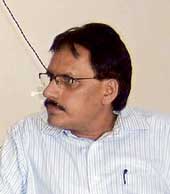 In a move against corruption,Jharkhand Chief Minister Raghubar Das today directed the concerned authorities to recover the fund lost by the senior IAS officer due to late collection of fine from the company in implementation of the government scheme.

B.K.Tripathi,an IAS officer of 1983 batch,who is currently on central deputation,was alleged to have delayed in recovering the fine from the company responsible for violating the term and condition of the contract signed by it under the Sarva Shiksha Abhiyan meant to publish and supply books to students free of cost during 2012-13 when he was Jharkhand’s Principal Secretary,Human Resources.

In the past,the state government had ordered an inquiry into the charge of delaying the recovery of fine from the company.The inquiry conducted by senior officers headed by the state Development Commissioner had found Tripathi guilty.