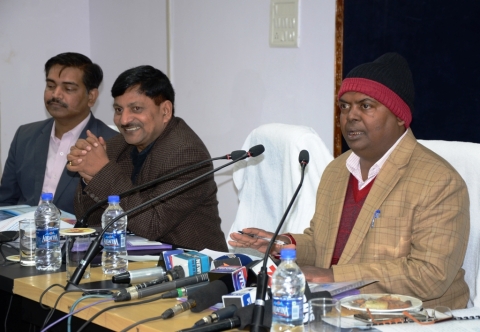 Jharkhand capital has been equipped with 1960 made drinking water facility.Since this old system continues to serve the people and in view of the demand of the people in future,building an alternative system is the need of the hour,said Jharkhand Minister of Drinking Water and Sanitation,Chandra Prakash Choudhary.

“Toward this end,the Water Resources Department is working in league with the concerned departments”,said Choudhary.adding that the work was going on at the Panchayat level.

The Minister also talked about constructing toilets.”No compromise will be made to minimise quality and action will be taken against any body found to have violated the law and indulged in wrong doings”,said the Minister.while addressing the media persons inside the Suchna Bhawan in Ranchi today.

“In view of the people affected by the draught,every MLA was handed over Rs 50 lakh so that the honourable MLA can use the fund to make the pond and wells functional”,he said.

Talking about the deteriorating water crisis,the water in Hatia was being provided from Rukka.’No shortage of water was created.The scene is such that the supply was more than the demand.

“Only due to theft of water,the shortage was created.And as such,the Ranchi Municipal Corporation was directed to take legal action against water thieves”,said the Minister adding that the project Ranchi Urban Water will be implemented by October 2016″,said the Minister.

Claiming that during the past one year,his Ministry has succeeded in getting involved in building 773 check dams;providing water through through 70 km long canal;and sanctioning Rs 500 crore for its renovation.

He said that in this state,182249 personal toilets,35 community toilets,506 school toilets and 9 Anganwadi toilets were constructed.