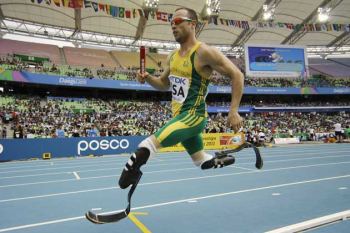 Reports said Pistorius, popularly known as ‘Blade Runner’ made history in London Olympics -2012 when he became the first amputee to compete in the Olympics qualifying for the semi-finals with a season’s best of 45.44sec,and won gold in the 4x400m relay at the Paralympic Games,mistook her as a burglar at his Pretoria home and shot her in arm and head with a 9 mm pistol this morning.

Xinuha quoted Johnnesberg police spokesman Denise Beukes saying a case of murder has been registered against him.”Pistorius, who was traumatized by losing a person he said he was very close to, was fully cooperating with the investigation”an AFP report quoting Beukes said.

Incidentally,Pistorious, an athelete whose both legs were amputated below the knee before he was aged one, because of a congenital condition, runs on carbon fibre blades.
In 2012,Time Magazine described him as one of the world’s 100 most “influential people.”