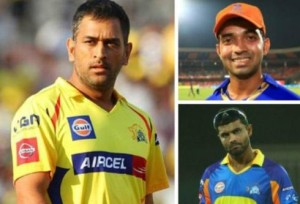 Many top players including skipper Mahendra Singh Dhoni, Ravindra Jadeja, Ajinkya Rahane, Suresh Raina and Ravichandran Ashwin, among others, will be up for grabs for the two new IPL teams – Pune and Rajkot – in the draft to be held in Mumbai tomorrow.

Sanjeev Goenka’s New Rising won the bid for the Pune franchise while Intex won the bid for Rajkot after a reverse bidding process held here on Decmber 8 to replace banned-Chennai Super Kings (CSK) and Rajasthan Royals (RR) for the next two editions to be held in 2016 and 2017.

Among international names, New Zealand skipper Brendon McCullum, Australian Shane Watson, Steven Smith and West Indian all-rounder Dwayne Bravo will be hot picks from a total of 50 players, who played for CSK and RR in the last edition earlier this year.