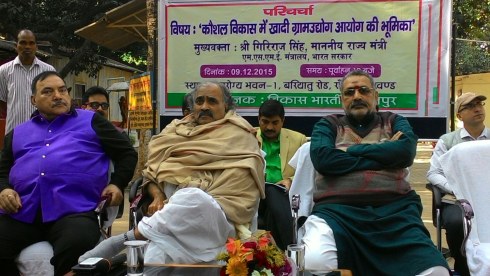 A discussion took place in Ranchi today on the “Role of Khadi Gram Udyog in Skill Development”.

Held inside the premise of the Jharkhand based NGO-Vikas Bharti,the discussion was presided by Union Minister of State Giriraj Singh.The Vikas Bharti’s founder and Chief Ashok Bhagat,who was recently awarded Padam Shree.

Both Bhagat and Singh who represent the ruling BJP,shared the view that Khadi Gram Udyog can play a significant role in promoting skill development and offering employment to the youths in rural areas of the country.