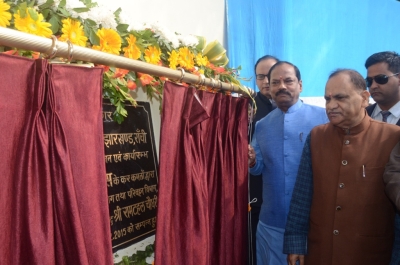 Jharkhand Chief Minister Raghubar Das today said that the construction work of Press Club carrying modern facilities will be completed at Karamtoli Chowk in Ranchi in a time frame.

The Press Club will be equipped with Gym to help journalists maintain good health,said the CM while offering ‘Bhumi Puja’ to mark inauguration of the construction work of the Press Club today.

Das said that he not only makes announcement about the scheme,but implements it.He said in presence of journalists and activists that he was happy that since officials and employees of the state were working to offer best service,the state is gaining good image.

The CM said that he understood the practical difficulty of the journalists.He pointed out that they should not worry as the state government is working for their concerns.Soon,Dhanbad and Deoghar will also have a Press Club.

Citing an example,the CM said that after journalist Rahul Priyadarshi died in Dumka,he will go to his house and hand over Rs 5 lakh to his family.He appreciated the House Construction Department for setting its target to complete the construction work of the Ranchi based Press Club in 18 months at a cost of Rs 6 crore.

Talking about the housing scheme for the journalists,the CM said that he will link it up with the state government’s housing policy in the making so that not only journalists,all sections of the society get houses.”I will not create any discrimination”,said the CM.