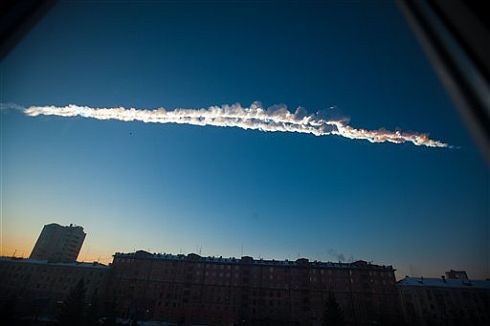 China’s news agency Xinhua came up with a story on a meteorite bursting into the sky over Russia’s Urals region.

The story quoting official of the Emergency Situations Ministry in Moscow said on Friday that it burned up before landing.

“What happened over the Urals region was not a meteor shower, as was reported earlier,” Xinhua report quotes ministry spokesperson Yelena Smirnykh telling the Interfax news agency. “It was a meteorite which burned up as it passed through the lower layers of the Earth atmosphere.”

The report said the “impact wave, which smashed windows in several houses in the region, has caused several injuries.”

Other media reported earlier that a meteorite fell in the region and four children were injured by shards of window glass smashed by the falling space debris.

The spokesperson noted that radiation levels remain normal in the area. “No increase in radiation levels have been observed. The meteorite did not affect them,” said Smirnykh.[vsw id=”t3PTQMHu4_0″ source=”youtube” width=”650″ height=”450″ autoplay=”yes”]