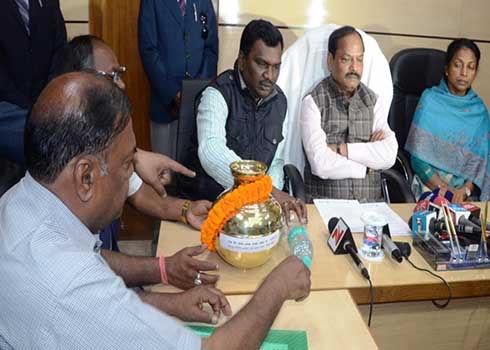 Jharkhand Chief Minister Raghubar Das is scheduled to hand over the Kalash  carrying the historic soil brought from the graveyard of the winner of Param Veer Chakra Albert Ekka to his wife Balamdina Ekka at her village called Jari in Gumla district on December 3.

In fact,the Army personnel,in respose to the request made by ex servicemen led by Anirudh Singh,had brought the cemetery soil of three martyr Army jawans–Albert Ekka, David Tigga and Joseph Toppo-who had died in service in the battle during the Indo-Pakistan war of 1971.After their death in the war,they were buried  in the Army’s memorial cemetery at Dulki village in Agartala.

“After the Kalash carrying the soil from the graveyard of these three maryr soldiers were brought,they have to be handed over to their relatives.Good thing is we all know about Albert Ekka’s wife.But the sad thing is we still don’t know about the background of two other martyrs’ relatives”,Singh told www.jharkhandstatenews.com.

Das has thanked the Army and ex serviceman Anirudh Singh and said that their work indicates the feeling of patriotism.”It will provide a sense of patriotism to the people of the coming generation”,said the CM.

The CM thanked media persons for their investigative jounalism in finding out the place of the martyr’s cemetery.He made this statement in a meeting attended among others by his cabinet colleague and Minister Dr Loise Marandi,Minister Amar Kumar Bauri,CM’s Principal Secretary sanjay Kumar and the CM’s Secretary Sunil Kumar Barnwal. .