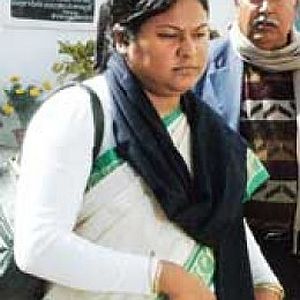 Sita Soren,daughter in law of JMM president Shibu Soren and its MLA,is under the radar of the police in Jharkhand.The DY SP Anuranjan Kispotta has issued directive to arrest her in connection with a kidnapping case.

The case is linked with the Rajya Sabha by polls.The CBI is investigating the charges of cash for votes against a set of MLAs including Sita.Her two staff Vikas and Santy Pandey were witnesses who had recorded their statements against her.

In a bid to wean away Vikas and Santy,Sita with the help of her body guards had taken them into her custody and detained them at her official residence on December 24,2012,alleged the FIR filed by Rina Devi,wife of Vikas.During the investigations,these were prima facie found to be true.

In view of the recorded evidence,Kispotta directed the officer in charge of Ranchi based Argora police station’s officer in charge PK Das to arrest her.A report toward this end was sent to senior police officials.

Since the police had slapped the charges of kidnapping and assault under Sections 365,363 and 504 against her,she can face imprisonment upto ten years in jail.