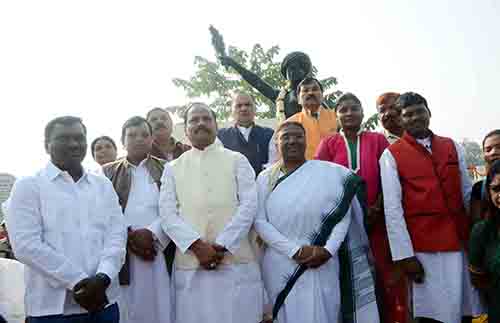 Top brass of the state government today moved around together to celebrate the twin event connected with birth anniversary of late Birsa Munda and foundation day of Jharkhand.

As it is,Birsa Munda was a famous tribal freedom fighter, religious leader and folk hero.He belonged to the Munda tribe.

He spearheaded an Indian tribal movement that rose in the tribal belt of modern day Bihar and Jharkhand in the late 19th century, during the British Raj, thereby gaining a top space in the history of the Indian independence movement.

Birsa Munda’s achievements were remarkable especially since all these were accomplished by him before he attained the age of 25 and died behind the bar in jail in Ranchi on June 9,1900.