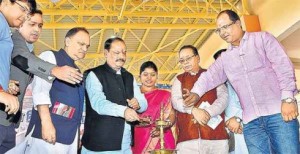 As part of the celebrations of Jharkhand’s Foundation day, Birsa Munda Bus Terminal has been inaugurated by Chief Minister Raghubar Das.

The inauguration of bus stand at Khadgarha in Ranchi marked the end of a project starting in 2014. It is of an international standard and the facilities at the bus stand includes, shops, food plaza, dormitory, well equipped waiting rooms and many other facilities.

In addition to this the Chief Minister announced several other welfare schemes and also launched the Sewerage and Drainage project in Ranchi.

Earlier, the Ranchi Deputy Commissioner Manoj Kumar had informed that the state Foundation day will be observed for three days, beginning from November 13 and continue till November 15,with several inauguration and foundation stone laying ceremonies.