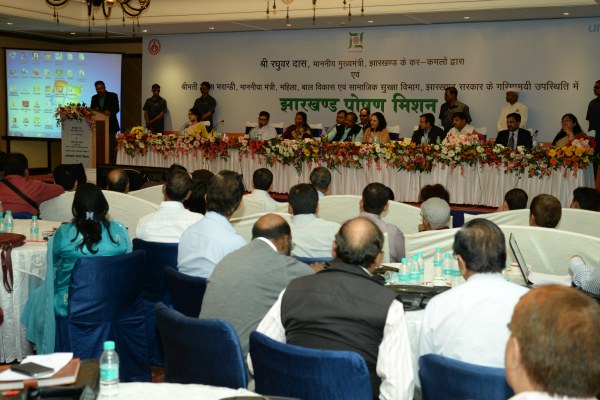 The Jharkhand Nutrition Mission (JNM) was launched by the Department of Women and Child Development & Social Security, Government of Jharkhand here today. JNM will provide technical leadership to guide and assist the multi-sectoral plans for nutrition specific and sensitive interventions. The Mission will contribute by recommending, to departments evidence based innovative initiatives; improving monitoring and reporting systems for quality and coverage of nutrition interventions; generating evidence for informed action.

Jharkhand Chief Minister Raghubar Das said, “Jharkhand will be made ‘Kuposhan Mukt’ state within 10 years as targeted under the Jharkhand Nutrition Mission. The Mission has been created as an autonomous body to improve nutrition governance with UNICEF technical support. It will strengthen implementation and convergence between flagships to contribute towards improved nutrition indicators/outcomes of the state. It will address the issue of malnutrition with a multi-sectoral approach & monitor the initiative to address malnutrition at state, district and block level.”

He added, “The support of Information & Technology Department will be taken to create a database of pregnant mothers using mobile phones to provide them with health services. It is also planned to modernize anganwadis through the use of corporate social responsibility (CSR) funds.”

Louis Marandi, Minister, Social Welfare, Women & Child Development said, “We have made progress on the indicators on children in the state. The Nutrition Mission will take the nutrition messages to the community thereby improving their knowledge and awareness on these issues. The Nutrition Mission is a convergent programme between different departments which brings together key partners from civil society, the media, and academia, under the leadership of the Honorable Chief Minister to look at the best ways to improve maternal and child nutrition in the State.”

Vinay Choubey, Secretary, Women & Child development said, ”The State Nutrition Mission is envisaged to act as an advisory body for ICDS and NRHM and will act as a coordinating body to foster inter-sectoral collaboration for nutrition action among other departments – involving the Health & Family Welfare, Women & Child Development, Planning, Food & Civil Supplies, Tribal Affairs, Panchayat, Rural Development, Education, Drinking Water & Sanitation and others to accelerate efforts in improving the nutritional status of women and children in the state.”

He said, “There are 10 globally proven interventions to prevent under-nutrition among children and anaemia among women.” These include three breastfeeding practices (initiation of breastfeeding within one hour of birth, exclusive breastfeeding for first six months of life & complementary feeding from the 7th month along with breastfeeding) and reducing anaemia among women & adolescent girls by providing IFA tablets. Other interventions to reduce malnutrition are treatment of diarrhoea/ pneumonia/ malaria in infants; ensuring routine immunization; use of toilets; hand washing with soap at critical times and care of pregnant women.”

”The mission has set targets to bring down the number of underweight, stunted and low birth weight babies by 20%; wasting by 10%; prevalence of anaemia among adolescents by 20% and increase the number of children (0-5 years) exclusively breastfeeding by 20%. A number of committees have been set up at the state, district and block level as part of the mission,” he said.

Mr. Vidyasagar, Princiapl Secretary, Department of Health & Family Welfare said, “This is a landmark day for the state of Jharkhand. We are facing two challenges in the state – (1) malnutrition & (2) anaemia – and there is a direct link between the two as anaemic mothers often give birth to underweight babies. The Jharkhand Nutrition Mission will strengthen the coordination and convergence work between the four departments – Health, WCD, Education & PHD. We need to change social practices, working first and foremost with communities and families to reach children during that critical first 1,000-day period in a child’s life. Nutritional deficiencies during this ‘critical window of opportunity’ can forever reduce a child’s ability to fight and survive disease, and impair their social and mental capacities. After the age of two, that window closes and the opportunity for the child to thrive is lost.”

Ms. Foroogh Foyouzat, Chief of Field Services, UNICEF India said, “Stunting in Jharkhand still remains much higher than the national average of 38.7% and needs special attention. There are three main intervention that may require intensified efforts: (1) Optimal Infant and young Child Feeding: even though breastfeeding practices have improved, complementary feeding has either deteriorated or remained unchanged; (2) Adolescent girls nutrition and care – 43% of adolescent girls still suffer from poor nutrition status and 33.4% still marry too early before 18 years of age; (3) Access to improved sanitation. As high as 76% of household still defecate in the open. Evidence tells us these major factors are the key drivers of stunting.”

She added, “I would like to laud the Government of Jharkhand for setting up a State Nutrition Mission as an advocacy body, which will perform advisory, coordination and knowledge management functions.”

Dr. Madhulika Jonathan, Chief UNICEF Jharkhand said, “The Jharkhand Nutrition Mission has been envisioned as an autonomous body to improve nutrition governance and to bring together technical agencies and CSO to strengthen the partnerships for nutrition. Nutrition has to be a social movement so that it can increases accountability of providers and increases participation of children and mothers.”

According to RSOC (2013-14), in Jharkhand, about half (47.4%) of the children under 5 years are stunted, or too short for their age, which indicates that they have been undernourished for a long time. One-third (15.6%) children are wasted, or too thin for their height, which may result from inadequate recent food intake or a recent illness and infection. About 42.1% are underweight, which takes into account both chronic and acute under-nutrition. More than 70% of women of 15-49 years and about 67% of adolescent girls of 15 – 19 years are anaemic in the state as per NFHS 3.

Under-nutrition leads to diseases and death of children. Poor nutritional status has its implications on cognitive development, years of schooling and productivity. Stunted mothers are more likely to have underweight children or children with low weight at birth (less than 2.5 kilogram); thus the cycle of poverty and malnutrition is repeated. The adverse effects of under nutrition among children are irreversible (Lancet, 2003).