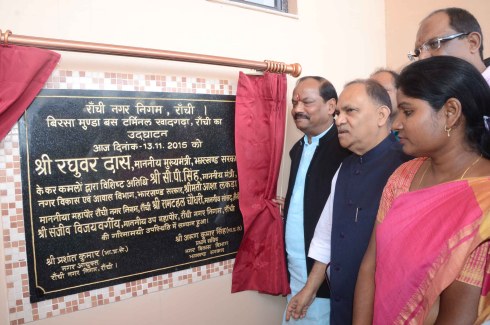 As part of the first phase of the celebration,Birsa Munda Bus Terminal was inaugurated by Chief Minister Raghubar Das and Minister(Urban Development)C.P.Singh today.They also launched the Sewerage and Drainage project in Ranchi.

Earlier,the Ranchi Deputy Commissioner Manoj Kumar had informed that the state Foundation day will be observed for three days,beginning from November 13 and continue till November 15,with several inauguration and foundation stone laying ceremonies.

In fact,the long delayed master plan 2037 is expected to be passed by the Urban Development Department this year, ensuring the city’s expansion.

“Once the master plan is implemented, residential and commercial areas will move to other parts of the city instead of being concentrated in a limited area, leading to congestion and traffic jams. It will also make way for broader roads, a planned sewerage and drainage system as well as the start of the mono rail”,said a senior officer of the Urban Development Department.

Today’s inauguration of Birsa Munda bus stand at Khadgarha marked the end of a project starting in 2014.It will provide a mega bus stand in Ranchi.