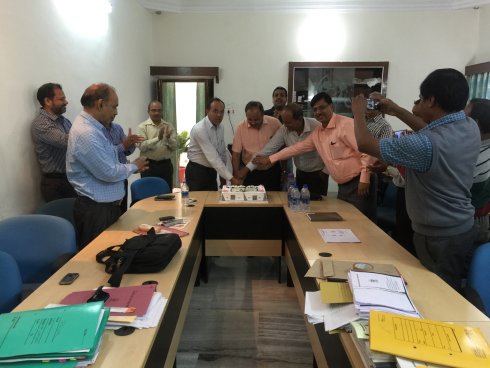 The PSU NTPC-Patratu Task Force today celebrated its 41st raising day to mark completion of 40 years of its inception .

GM-PTF and CEO designate of new JV cut the cake to mark the occasions along-with his team.

The event was attended among others by Head of Technical team, A.Majumdar,HR Head S P Dubey and DGM(HR) Rakesh Nandan Sahay.A joint venture company of NTPC & JBVNL has been incorporated on October 15,2015 as Patratu Vidyut Utpadan Nigam Limited (PVUNL).

The JV company with 26% non-capital equity share of the state government and 74% of NTPC would work towards performance improvement of Patratu Thermal Power Station (PTPS) and its expansion. The first board meeting of the new JV is scheduled on November 9,2015 at New Delhi

As it is,NTPC is India’s largest energy conglomerate with roots planted way back in 1975 to accelerate power development in India. Since then it has established itself as the dominant power major with presence in the entire value chain of the power generation business,said Rakesh N Sahay,Dy. General Manager(HR/EDC),NTPC -Patratu Task Force.