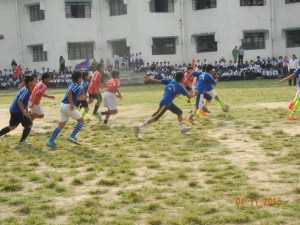 It was the occasion of Inter House Football match (Final) of Class IV in the Primary wing of DPS, Ranchi. The passionate calls of ‘Ganges, Ganges!’ and ‘Jamuna, Jamuna’ might have forced both these mighty rivers to leave Prayag and come to DPS, Ranchi.

Healthy competition – that’s what sports is all about. Children play to win and then learn to loose.

Next,learning sportsmanship that is winning or losing gracefully and getting ready to handle the difficulties successfully in their lives. The house wise league matches had been taking place for last one month where the participants for the finale emerged to be Jamuna House and Ganges House.

Although the zeal and enthusiasm of both the teams were splendid and remarkable, Jamuna House was Triupmphant! They withstood all the tension, suspense, fear and enigma and have shown that courage and honest efforts win. First half saw two goals by Dakshesh and Sumit.

Jamuna was dominating and attacking throughout the match. They won with the last minute goal made by Sumit Tirki. The faces of the following proud and worthy players of the winning team Jamuna were glowing with the success of the match Pranav Raj, Daksh, Dakshesh, Akshat, Sumit, Yash, Rahul, Shreyash, Abhijeet, Hardik and Raunak.

Principal,Ram Singh congratulated both the teams for their passion and sportsmanship and wished them good luck for their future endeavours.

This day proved the determination of the Principal Dr. Ram Singh to provide overall and all round personality development of the students. A really fun filled day!